A small selection of some of the more interesting and unusual pieces of street furniture to be found around Dorset. Again a post I will revisit as there are a few unusual items I know of but haven’t got around to passing by yet. 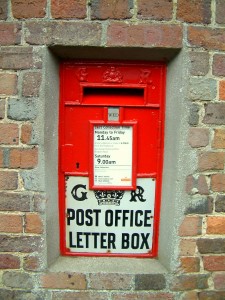 Inset into a cottage wall a nice bright King George Post box used by Lawrence of Arabia at the end of a track across Moreton common. 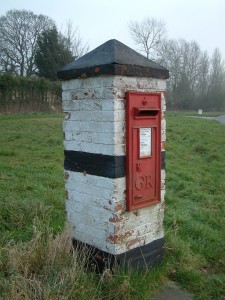 Outside Guys Marsh Prison this post box is all that remains of the Military Hospital that once occupied the site. The distinctive black and white paint being a vestige of the blackout regulations when this box would have been virtually impossible to see at night on a remote hillside during the war with just shielded lights to guide your way. 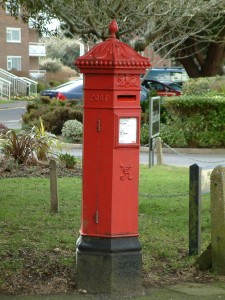 An ornate Victorian pillar box on Bournemouth East Cliff. Most of the Gothic and Romanesque Victorian Villas have gone now from this area on the town. One is derelict, and others have left only parts of garden walls or gate posts amongst the modern Art Deco period, or later hotels and apartments.

At first glance this may be taken as just another post box, on a post! Many in Dorset in rural areas or on the outskirts of villages are like that but they are marked ER and on metal posts. Often they replace smaller ones like this rare King George box mounted on a sturdy Oak post. This location has no new houses since the box was erected and thus little call for a larger replacement. Note the lengths of electric fencing to keep the cattle out of the ditch on their way to milking. 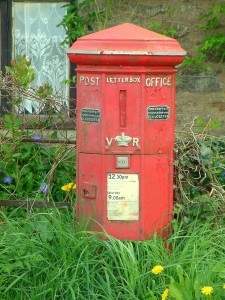 Little change in a rural location has not just led to a pillar box not being replaced, it has meant that the village of Holwell has in fact the oldest Post Box in use in Britain.The vertical slot, with a cast iron flap inside to keep the weather out only worked to a degree. The horizontal shielded opening we are familiar with seems obvious with hindsight, but these were early says. A postcard exists of the centenary of this Post Box, with our then local Postie, dressed half in period uniform and a pair of yellow flares, too short and soon to be out of fashion!