There are many examples of Art Deco architecture around the county from Bournemouth westwards. Although Bournemouth has only been part of Dorset since 1972, I feel enough time has passed to now include it! Relatively young as a town, it was for centuries grazing and heath land next to the town and port of Poole. This late development, as a dominant and high quality sea side resort contributes to the type and number of Art Deco style buildings around Bournemouth, and which survived the war and ‘developers’. Many towns were only to see perhaps a Cinema in the style, only to lose it again as fashions changed. 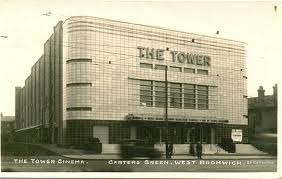 By way of example I include the now sadly gone Tower Cinema, West Bromwich, redeveloped in 1970 where Madeleine Carroll, the beautiful star of the famous Hitchcock film The 39 Steps, attended the première in 1935 as a local born girl, then an international star of a still highly rated British Film. 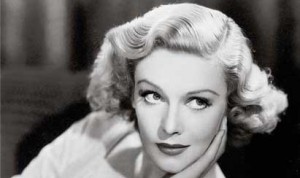 Madeleine Carroll.     West Bromwich born film star, one the first glamorous Hitchcock blondes, she outlived the then new Tower Cinema. The Compton Organ which once rose out of the floor survives at Fentham Hall, in Hampton in Arden, Solihull.     Hopefully this post in the blog shall be revisited,and other examples will be included such as cinemas and stores. I cannot pretend all the pictures are going to be the best as many lovely properties have sadly but understandably lost original fittings, and gained hoardings, satellite dishes etc. Change of use is inevitable, and now many of these buildings have gained more admirers, recognition and legal protection. I have resisted the temptation to sepia tone pictures and try to make them more ‘dated’. They are what they are now, old black and white postcards with vintage cars were of their day, ugly cars and vans of today will also be nostalgic vintage in time, the buildings are largely as they were seen in their day still looking great. Please feel free to contact us at intrinseca and tell us of interesting Art Deco sights, we have more but are always interested to hear of others. 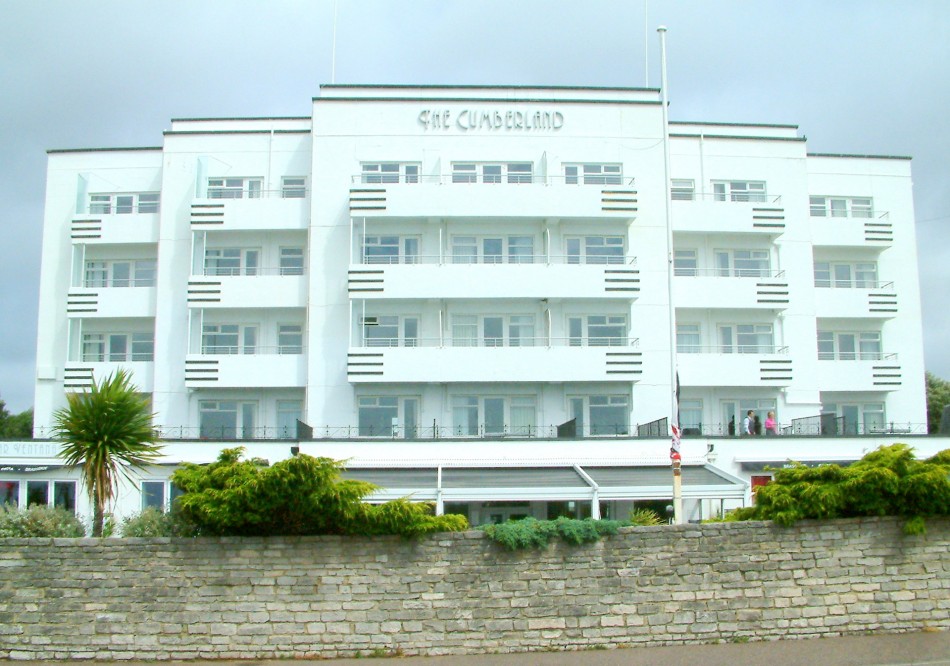 The famous Cumberland perched on the Bournemouth East Cliff, is still the best Hotel in the town. Truly stunning views out over the sea from the balcony rooms, quiet and within walking of the centre of the town. Afternoon tea, a pool on the sun deck and an excellent bar are notable features, also there are a lot on imaginative functions put on here by the friendly staff through the year. www.cumberlandbournemouth.co.uk I have used this as a convenient base for nights out in Bournemouth for several years, well worth a visit to the website to see what is on. 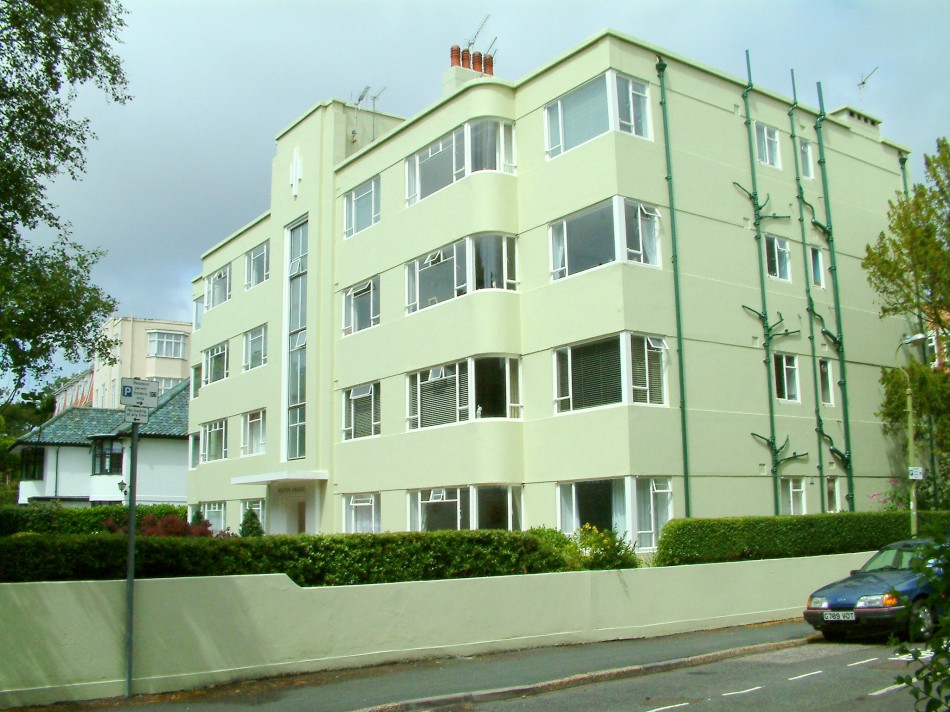 A block of flats or apartments with original windows, in a leafy road behind Bournemouth’s East Cliff. 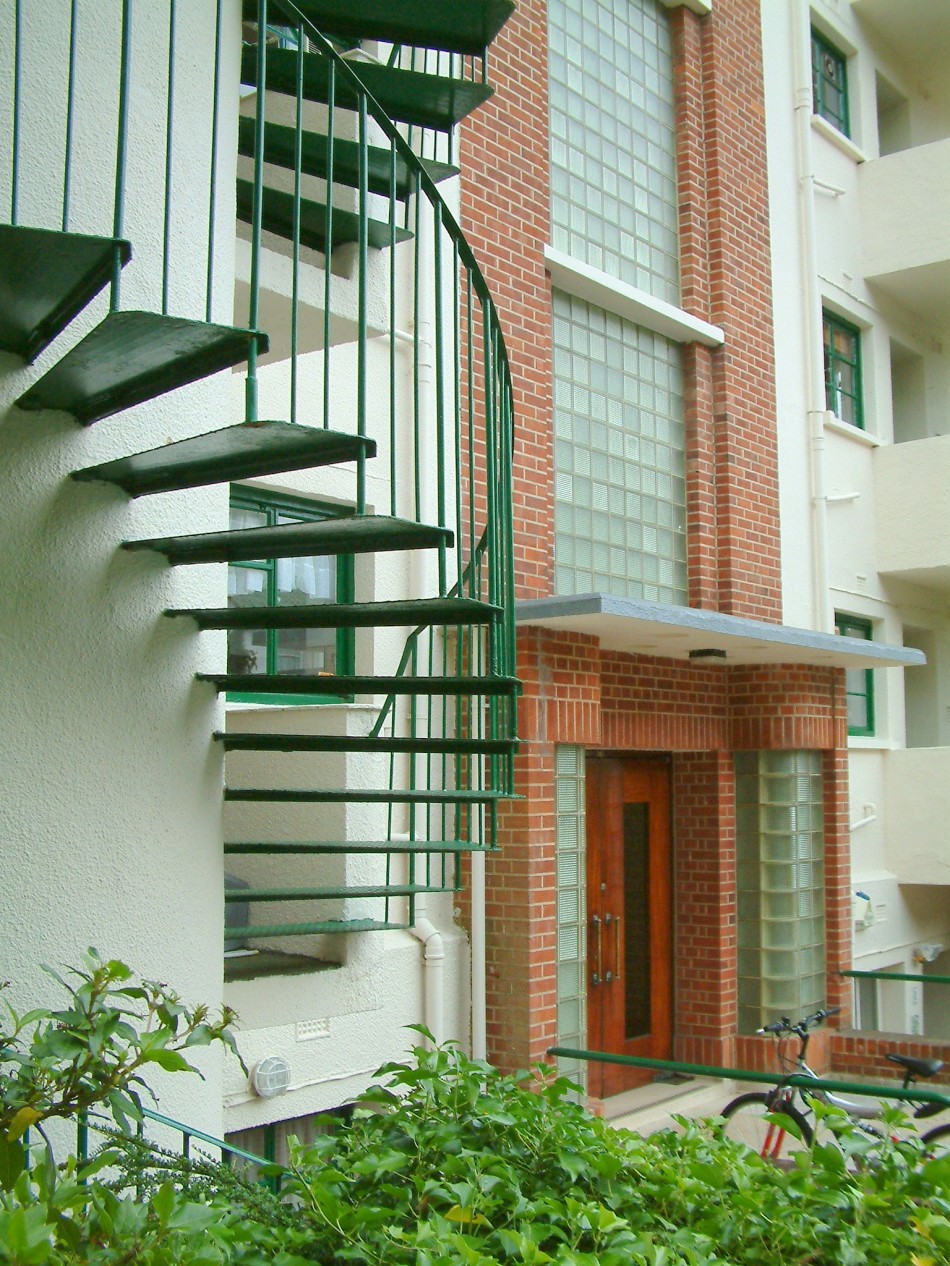 The rear of another block of flats, perhaps better termed apartments overlooking the Sea and beaches below the cliff. 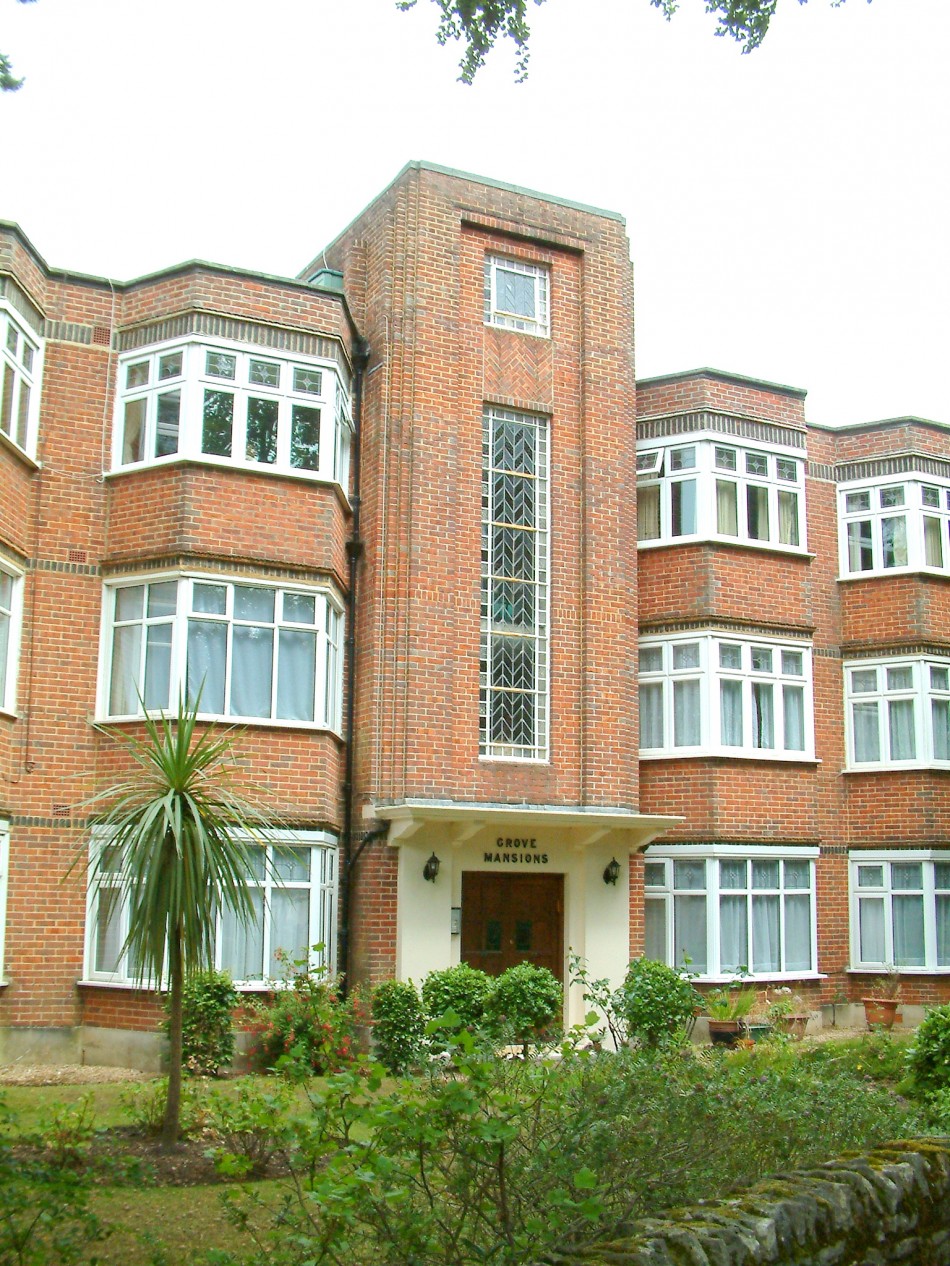 Grove Mansions on East Cliff, tucked further back from the sea, the new windows of the apartments are fairly harmonious and the central stairwell glazing is intact preserving the overall 1930′s appearance. 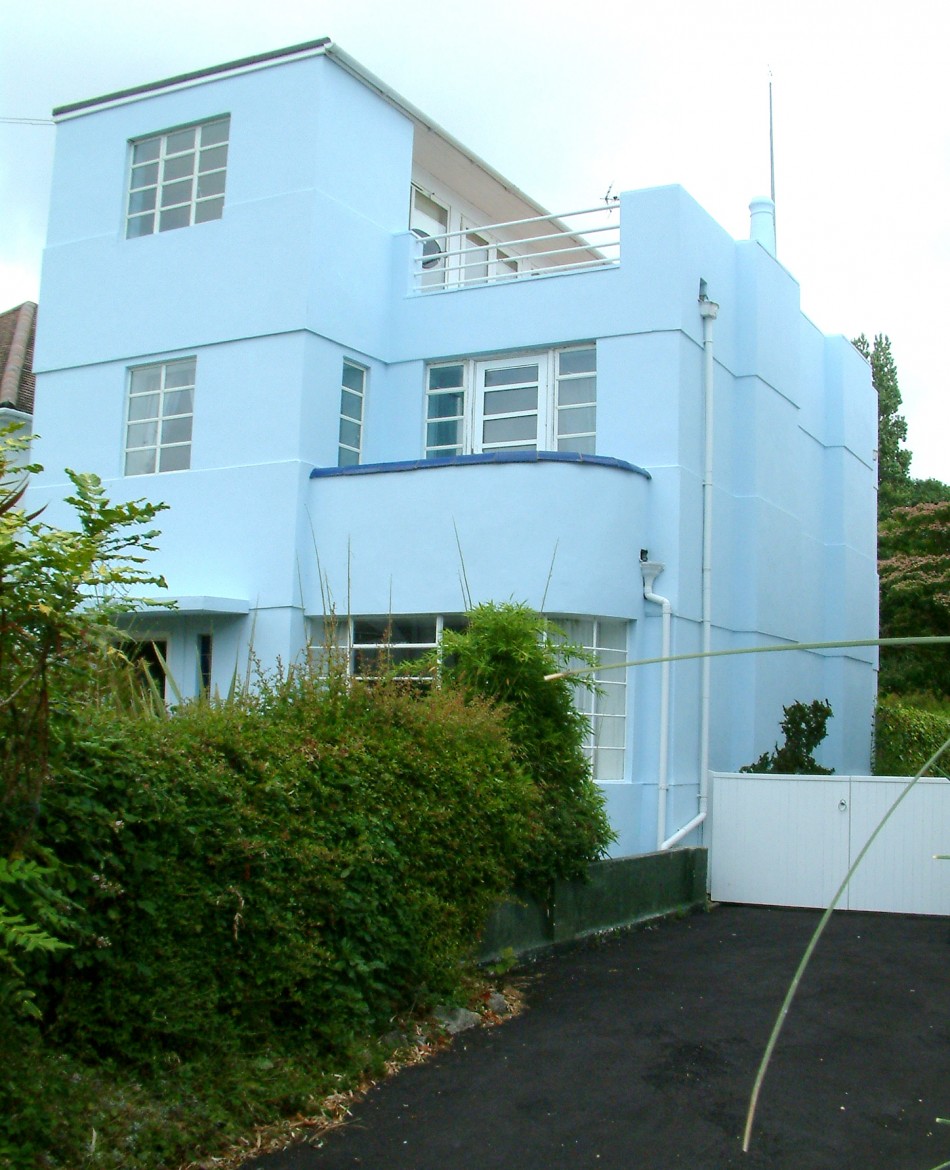 Over the border almost in Poole a private house I was lucky enough to view inside. Much of the interior had gone with so called modernisation but the owners had sourced period fittings, and commissioned craftsmen to put the house back to much of it’s original    condition. 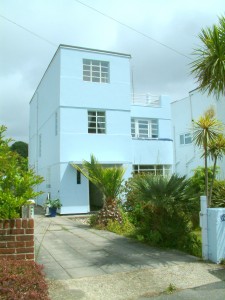 Another view of the above house, one of several in the area of Sandbanks. 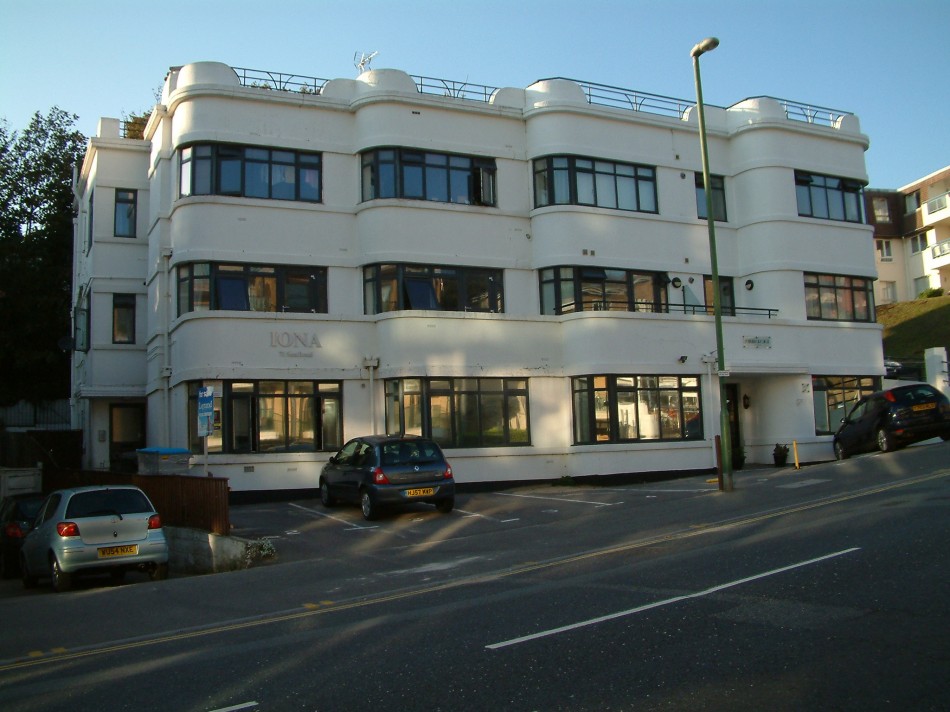 Close to Boscombe pier is the Iona building, with a bar, apartments and holiday flats. 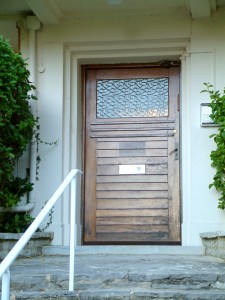 The original door to another apartment block on the sea front at Bournemouth. Sadly now the symmetry of this building is not what it was with new windows and sun rooms fitted to the balconies. I shall return later to get a better picture when my mate has taken his scaffolding down! 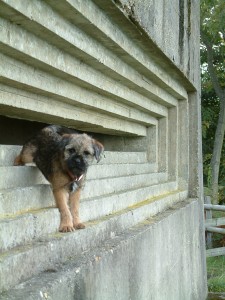 For comparison I have included this picture of a very important building in Dorset on the cliffs above Studland beach. Built by Canadian Army Engineers in 1943 and named after their Ontario base Fort Henry had a very short intended lifespan. Treacle the Border Terrier has just climbed through a very Deco styled vision slit. Built in great speed, and entirely functional perhaps the builders were influenced by other constructions they had made in peacetime. As a child in Hampshire I played in a large air raid shelter with distinct Deco detailing, and the name Plaza cast above the door. Through this vision slit King George VI, Prime Minister Winston Churchill, Supreme Commander Eisenhower, General Montgomery and other senior officers gathered to watch and safely endure the largest live ammunition exercise ever held in the UK, including an area carpet bombing as preparation for the invasion back into Europe.

Again functional, the rear steps to an apartment block in Bournemouth are still an Art Deco styled feature in concrete, the lines would have been enhanced in their day with the modern narrow glazed steel framed windows as retained on the house seen below.

In Dorchester the county town, not a great deal of Art Deco styled building can be found amongst the largely Georgian and Victorian town centre. There is a Cinema still in use, but if you head to the outskirts, a lovingly maintained example can be found. As the suburbs developed along with greater use of the motor car in many British towns, amongst the nostalgic half timbered detached villas of the 1920′s and 30′s developers often took a chance with a striking modern building. 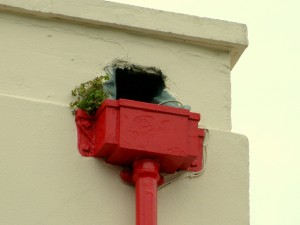 The lovely people in this house have retained the original features such as the Deco styled hoppers on the guttering. The windows have also survived the ravages of the “improvement” rage. 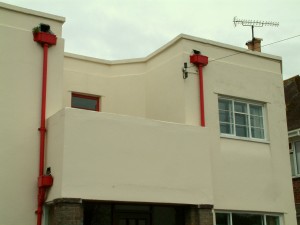 Another common feature seen on the modern styled houses of the 1930′s was the Sun deck or balcony. Getting away from the grime of many town centres sun bathing was in vogue. Here on the edge of town with clear views of the countryside a modern couple could enjoy increased leisure time in a quiet leafy road. 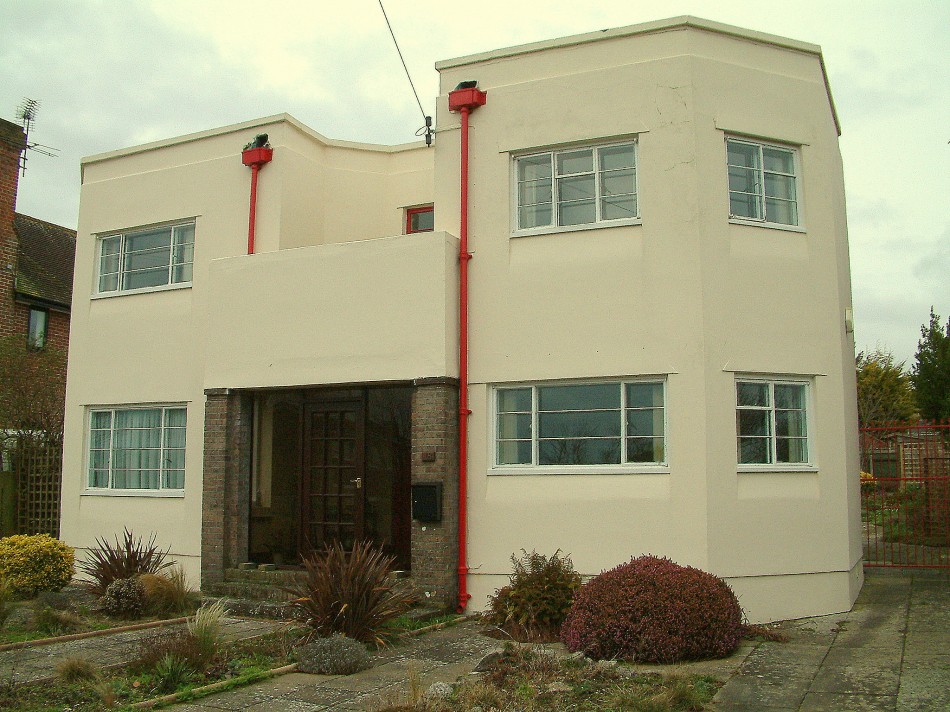 A simple boundary wall on one of the Bournemouth East Cliff Hotels, showing the geometric patterns and proportion that could have been otherwise simple and boring. Here the styling catches the light and casts shadows. 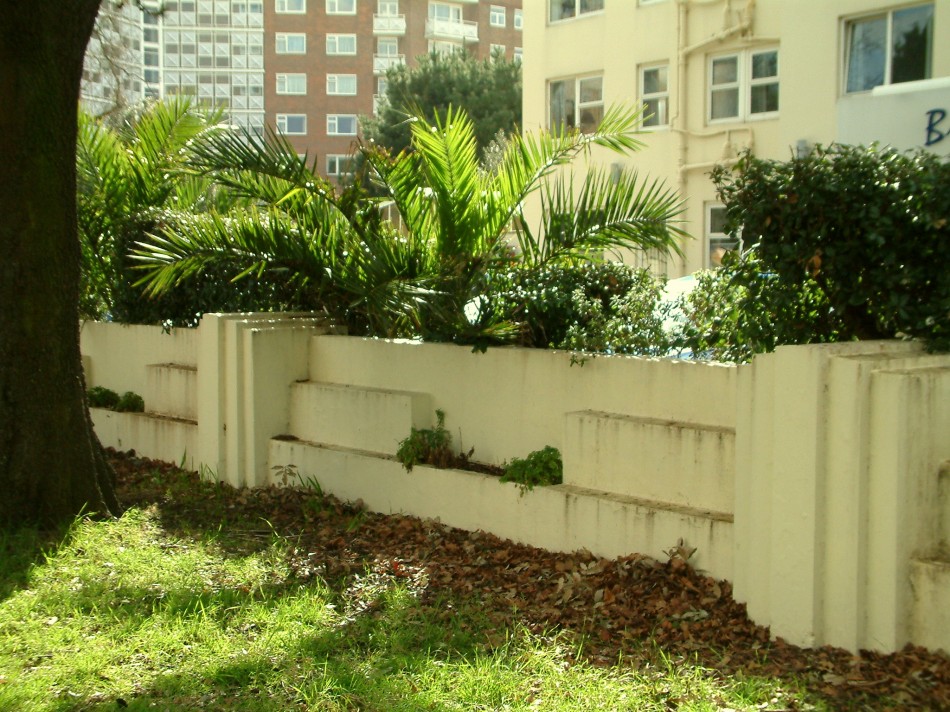 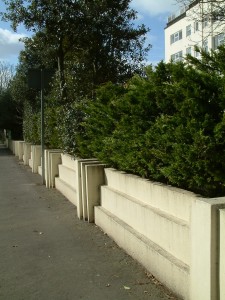 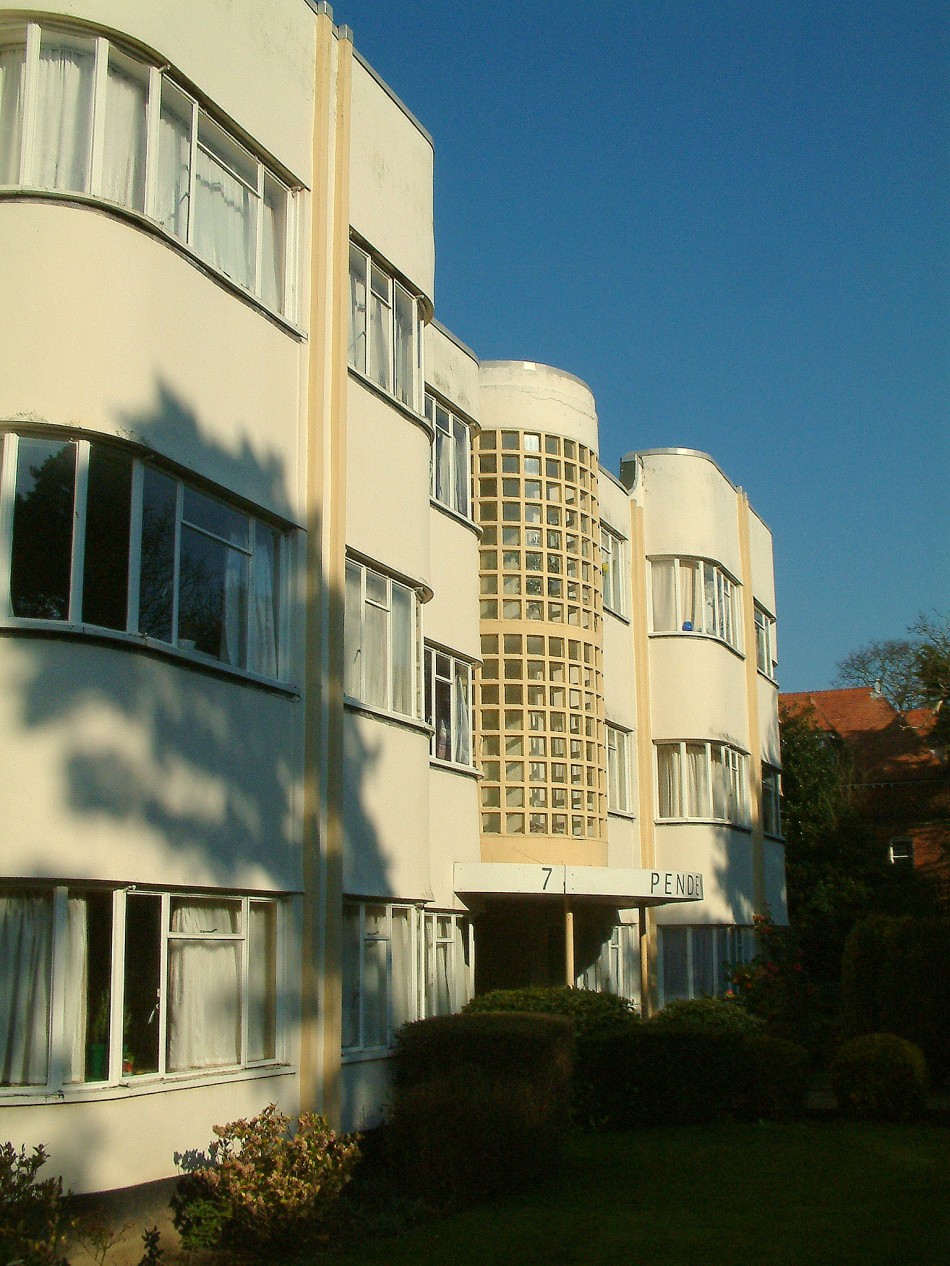 Pendennis , a spectacular apartment block. The curved crittall windows may have gone but the central glass tower still stands out and provides a head turner for people heading down to the beach. Miami may have Palm trees, but the Dorset Pines provide a unique scented backdrop. 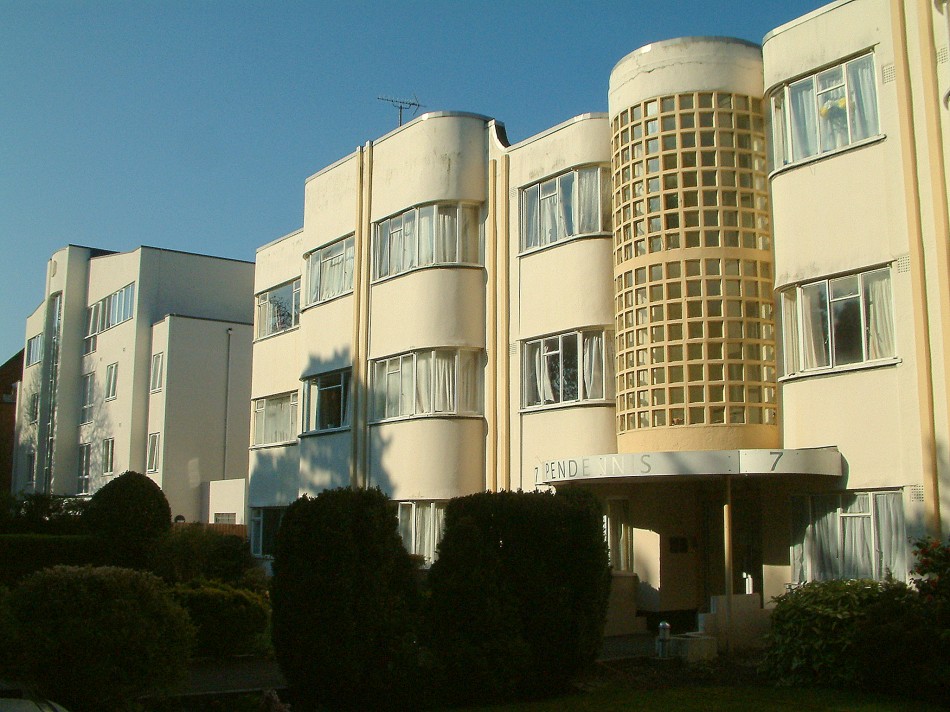 Fittingly a new block of apartments has grown up recently next to Pendennis inspired by the architecture of East Cliff. 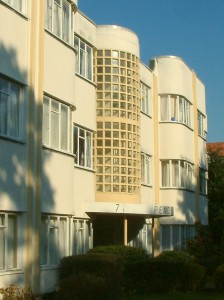