The picturesque thatched cottages of Dorset villages are are beloved of grockles or tourists from around the world. Often sought after as the ideal country retreat thatched roofs were common place in towns as well. In 1721 a massive fire swept through the market town of Sturminster. The White Hart built in 1708 was lucky to survive, (indeed it survived another major fire the other side in recent years) it continues to thrive and has recently been re thatched. 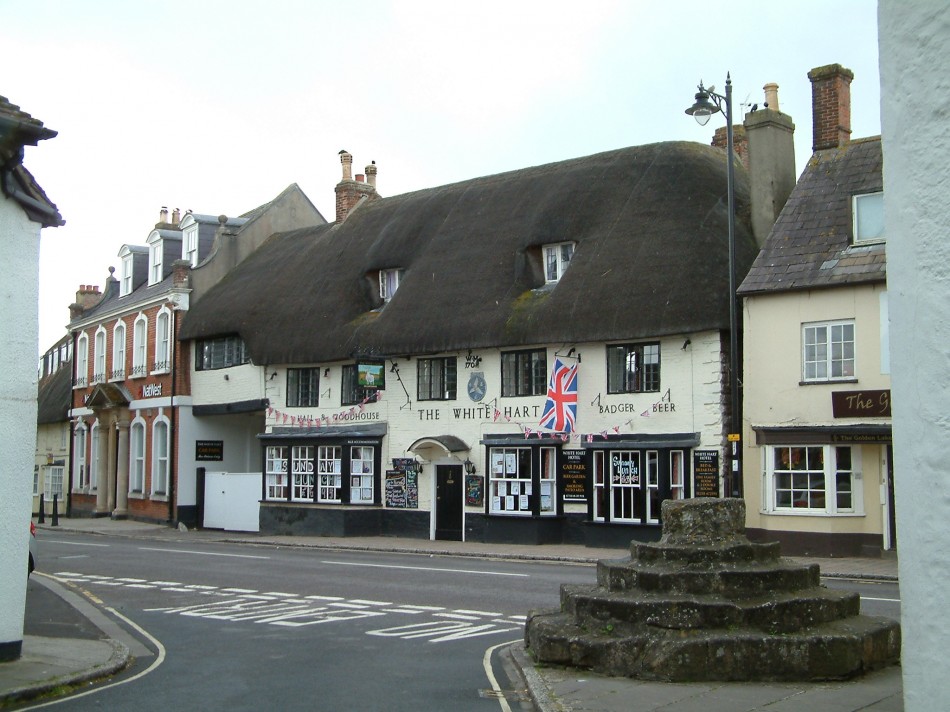 Still a genuine working pub for locals and welcoming to visitors from all over. The Hart has been witness to punishment whippings on the cross and the spontaneous mountain of flowers upon the death of Princess Diana over the centuries. Seen here at the start of its second Royal Diamond Jubilee weekend. 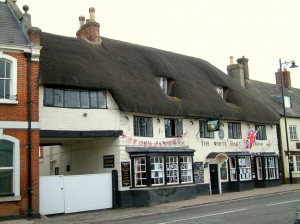 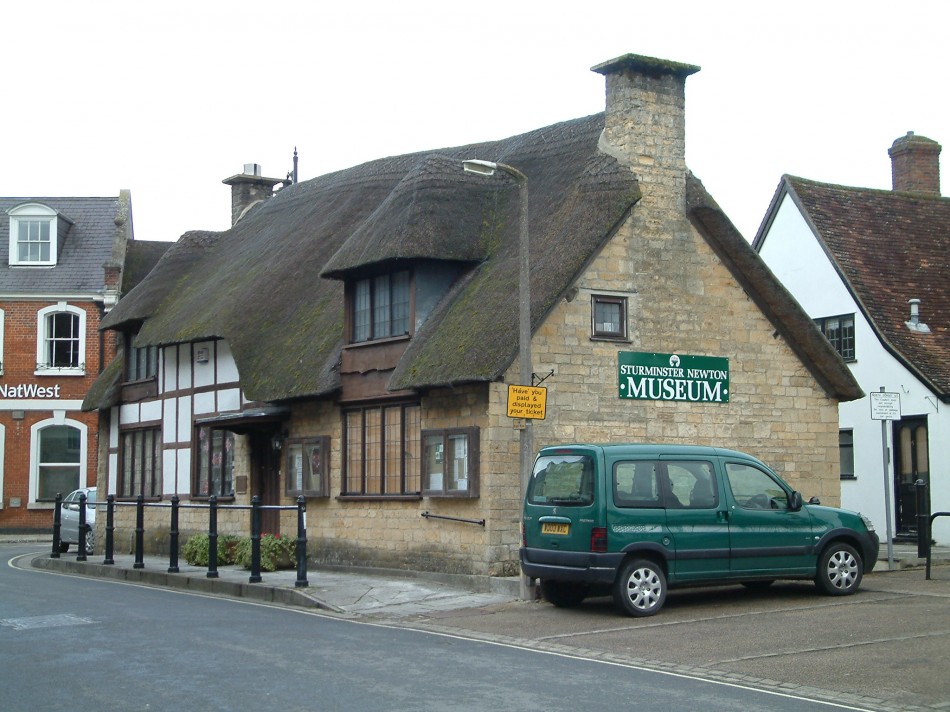 Across the road is the former town hall of Sturminster, now an excellent free museum, well worth a visit. A mix of local stone, timber frame with cob infill.

Still a working rural town with thatched cottages as farm workers homes as evidenced by the tractor in the drive, despite the loss of its calf market once the largest in Europe. Sturminster is now back at the heart of the Blackmore Vale with its new cultural Exchange building on the site of the old market. Community values being very strong here. 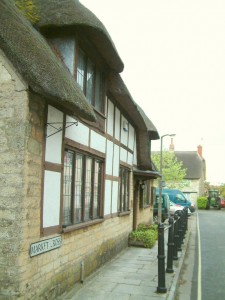 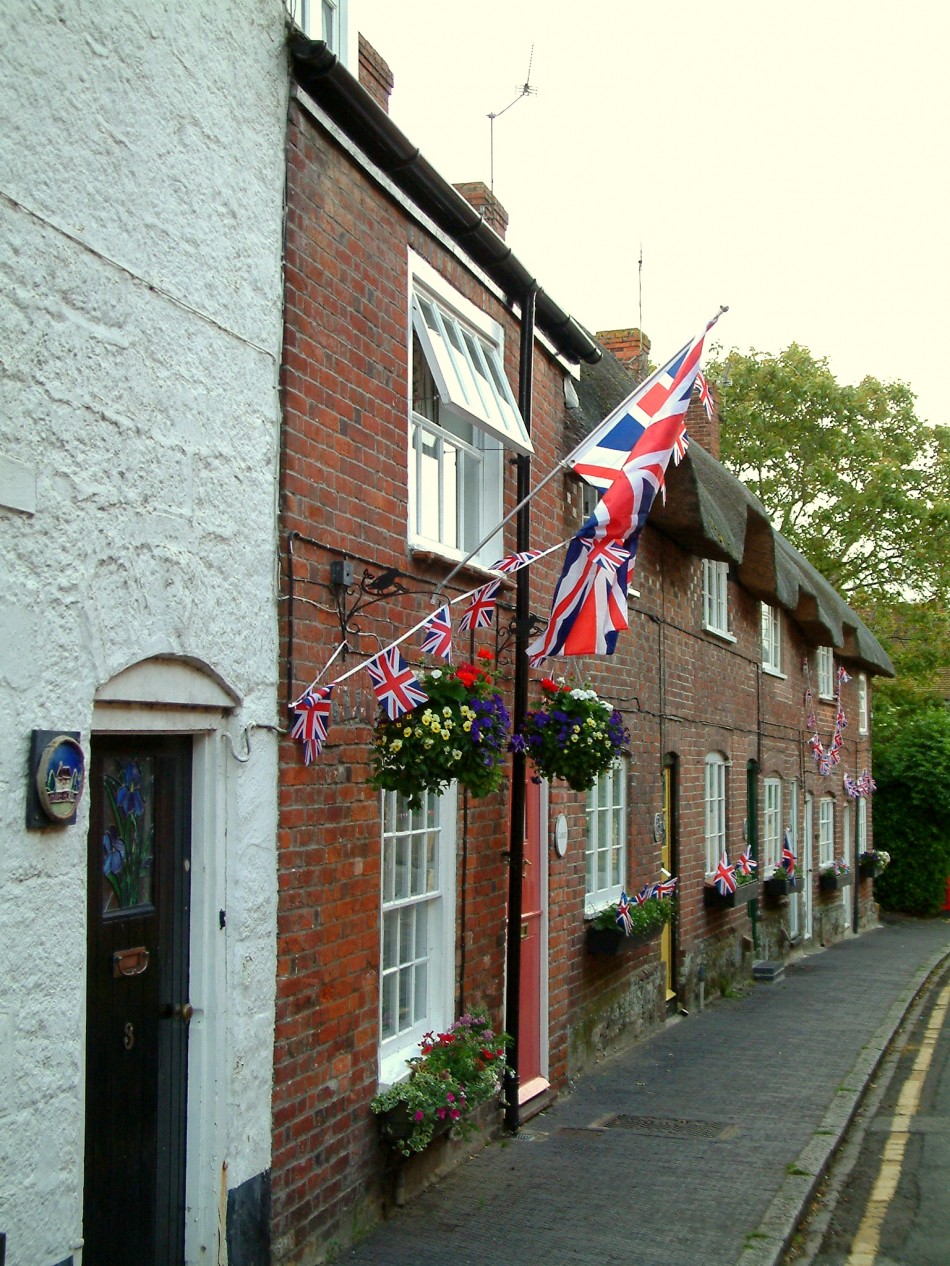 The kind of devastating fire that destroyed much of Sturminster to the north of the brick built cottages in the above picture was common across the country from the well known Great Fire of London, to fires that dramatically changed townscapes across Dorset including Wareham and Blandford where the Bastard brothers famously remodelled the town centre in Georgian times. Thatched premises eventually were not rebuilt in more built up areas after fires as they had been before, once clay tiles, and slates became commonly affordable. In amongst the cottages found in villages the modern materials of slate and tile were also used as alternative due as much to fashion and durability. Many gaps exist in village streets of thatch not due to fire but simply the cheaper cob built dwellings have rotted and gone. 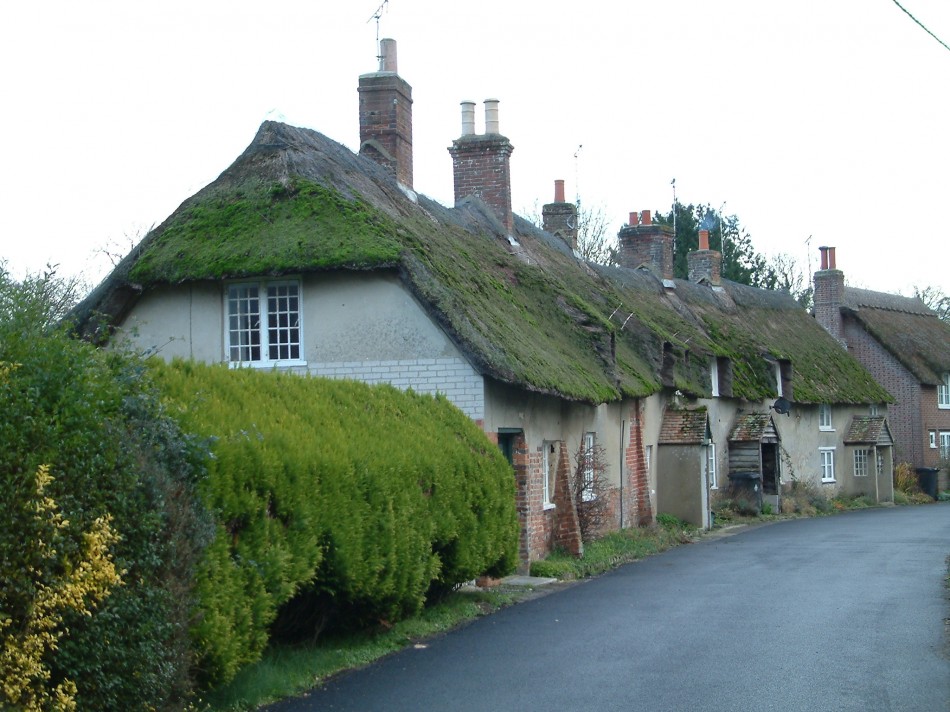 A rural row of cottages mainly cob in construction with brick repairs and additions. Often the cob cottages were of the poorest construction, the durable heart woods of Oak and Elm timbers have survived mainly with probably all the Ash and other cheap less durable timbers long since gone. 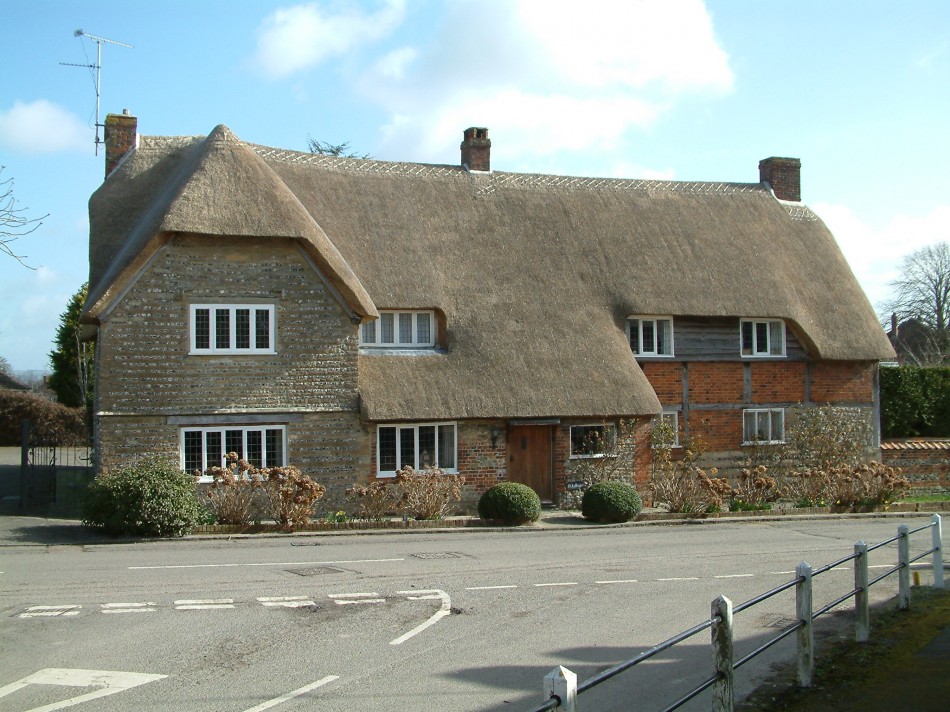 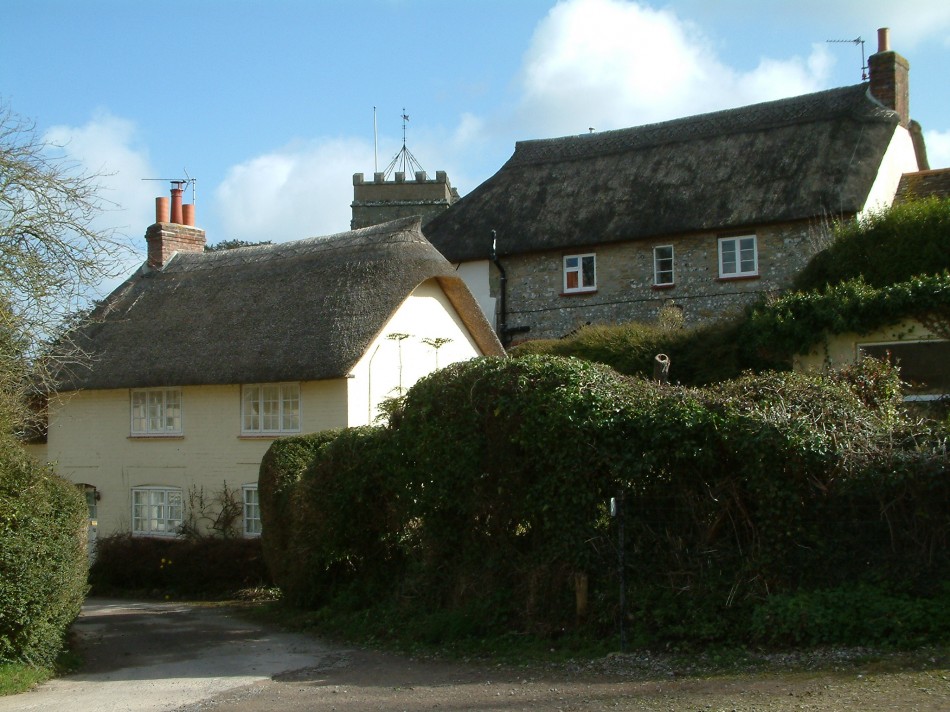 In the foreground a painted brick cottage showing later construction by way of the regular build style over all, same size windows and brick use throughout. Behind is an older property with stone and flint construction, an irregular pattern with render protecting the more exposed face, and an end which is of looser construction. 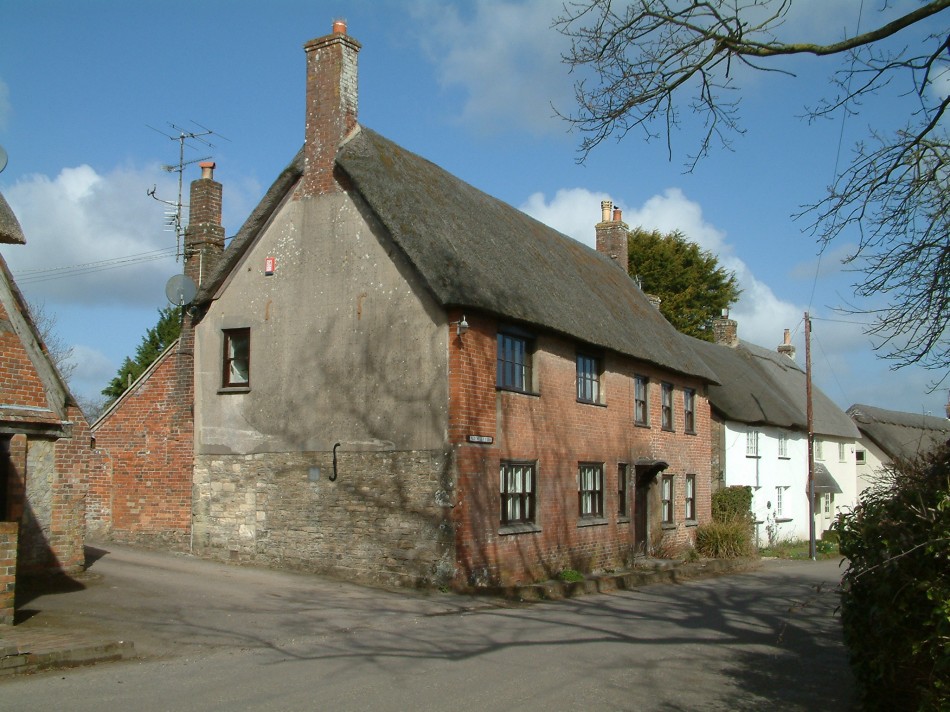 Again a miss match of vernacular styles in a street, this brick built farm house in the heart of village itself shows miss matched windows, perhaps again the result of subdivision. The stone and part rendered end wall shows wrought iron tie straps. The best face showing off the more expensive local hand made brick. And the later ‘lean to’ back extension constructed when brick and clay tiles were cheaper options than thatch. 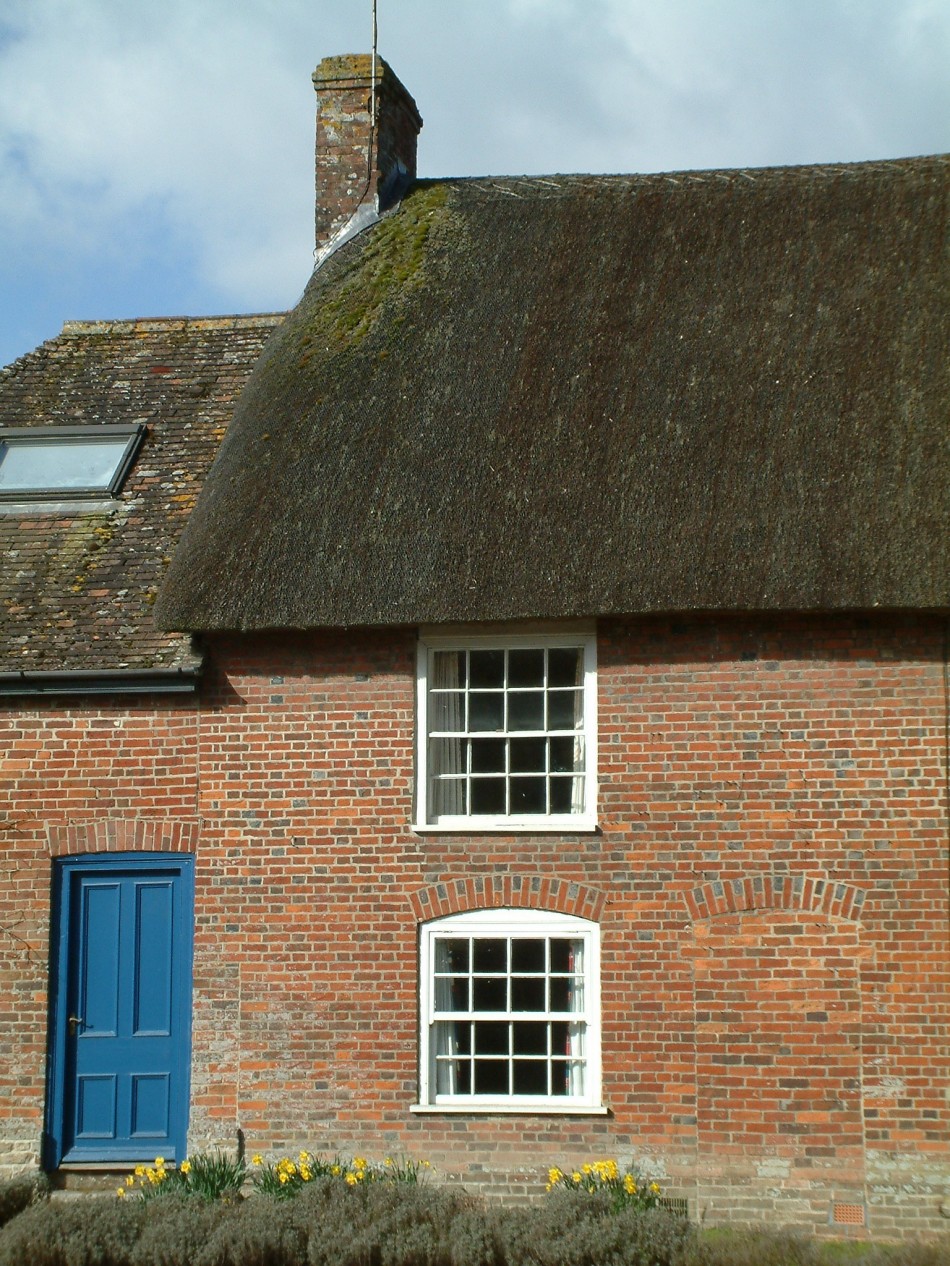 Part of a large brick farmhouse with Flemish bond courses, uniform windows and construction. However there is a brick and tile extension on either end in the same local brick, and the blocked doorway in stretcher bond shows when a pair of cottages were joined together into one dwelling. 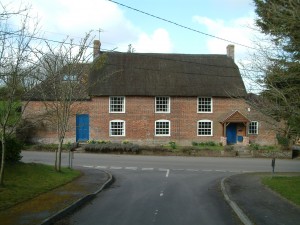 The same cottage seen from further back with the alterations blending in perfectly. 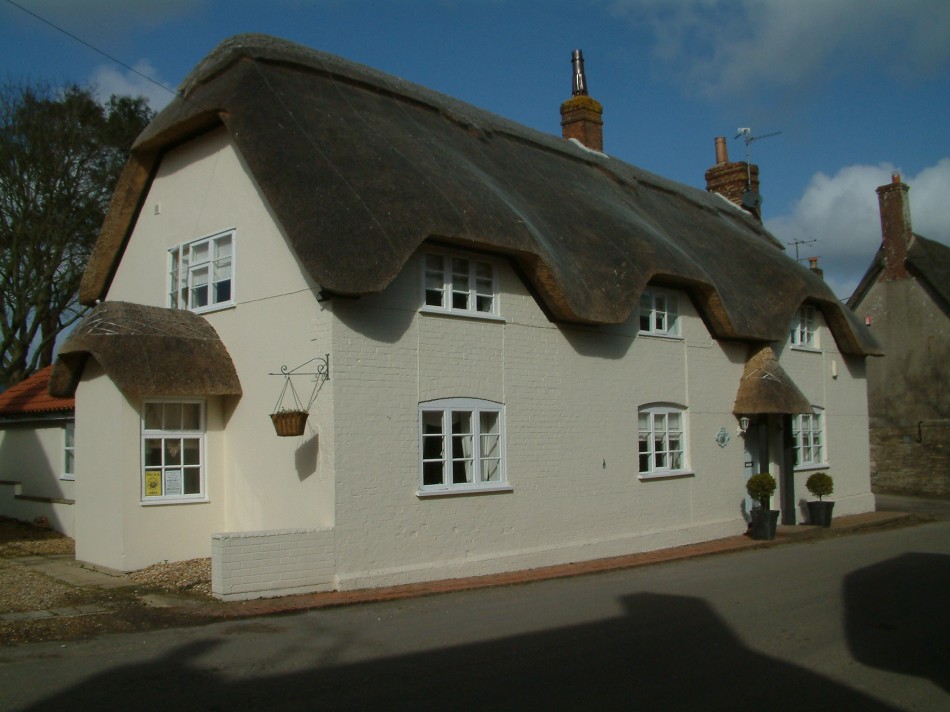 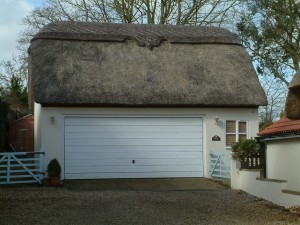 And round the side a thatched double garage blending in perfectly with the other structures along the street. 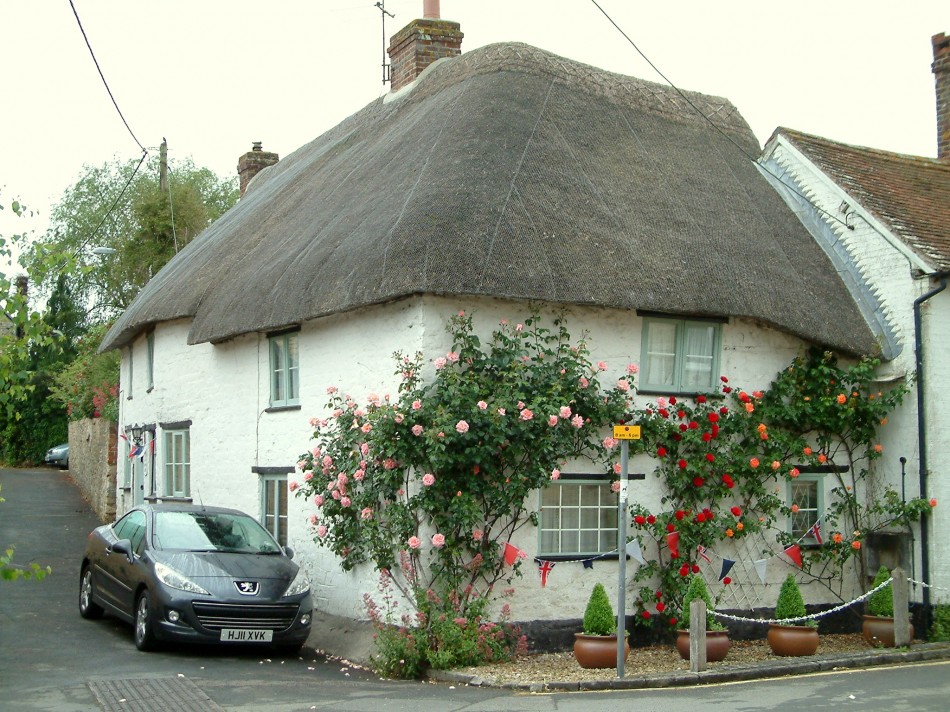 The rural dream of many, a Dorset cottage with climbing Roses. 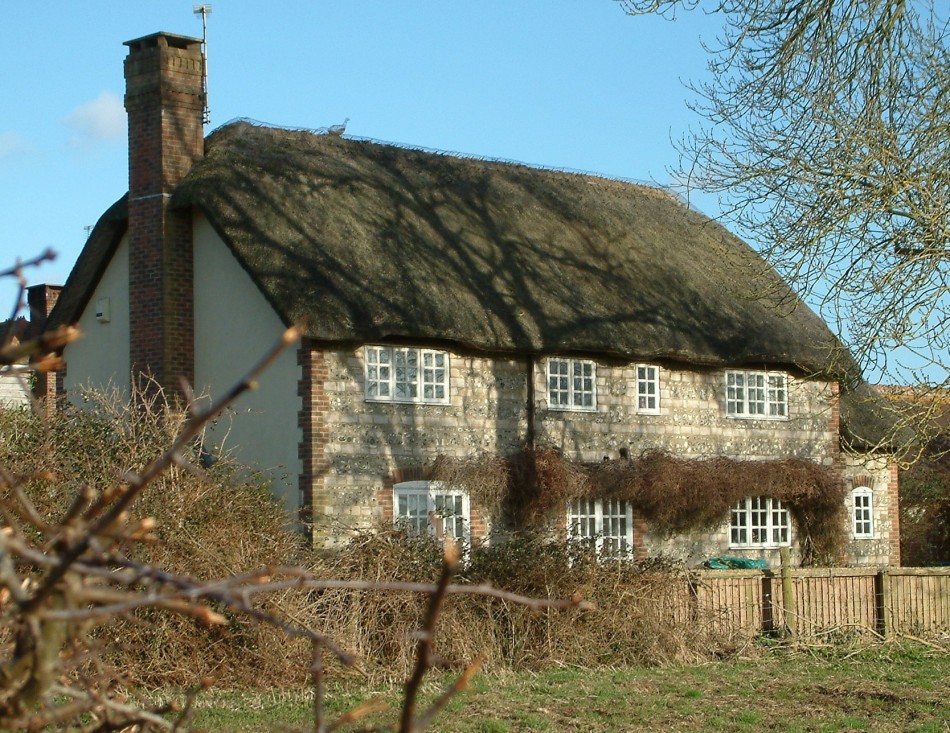 Another mixed brick, stone and flint thatched house on the edge of a village. But this one is deceptive and perhaps the acceptable face of HRH Prince Charles’  Poundbury legacy which has inspired a more fitting county plan where new homes blend in harmoniously with existing building. 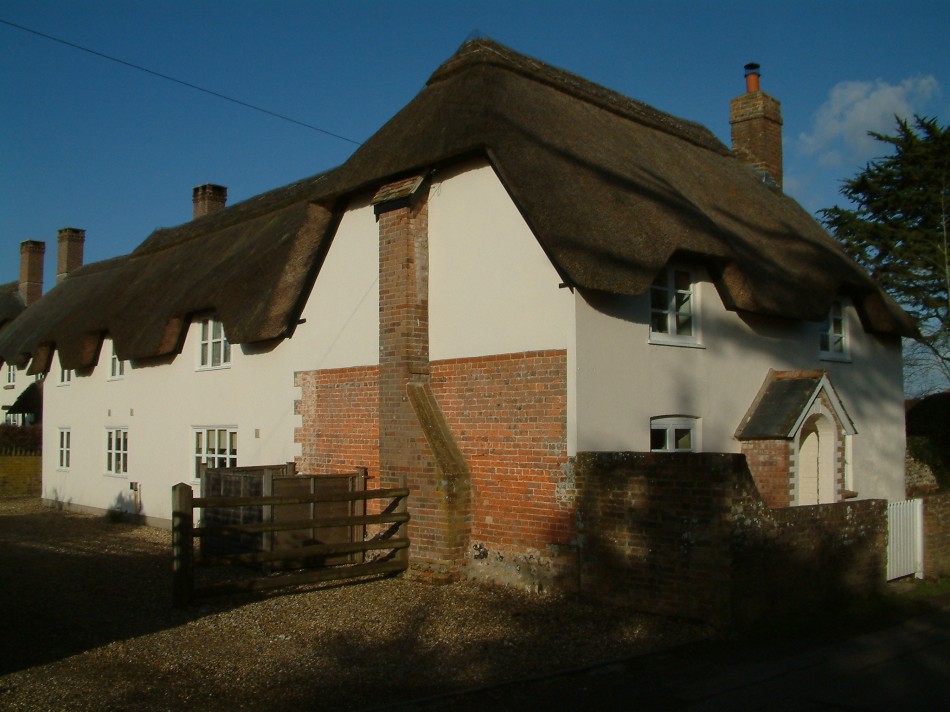 As an example of a new development blending in above is an old roadside cottage with exposed brickwork, a high wall leading to a farm yard which has modern thatched cottages adjoining in a small development which people pass without batting an eye. Only the standardised chimney tops reveal a modern pattern. 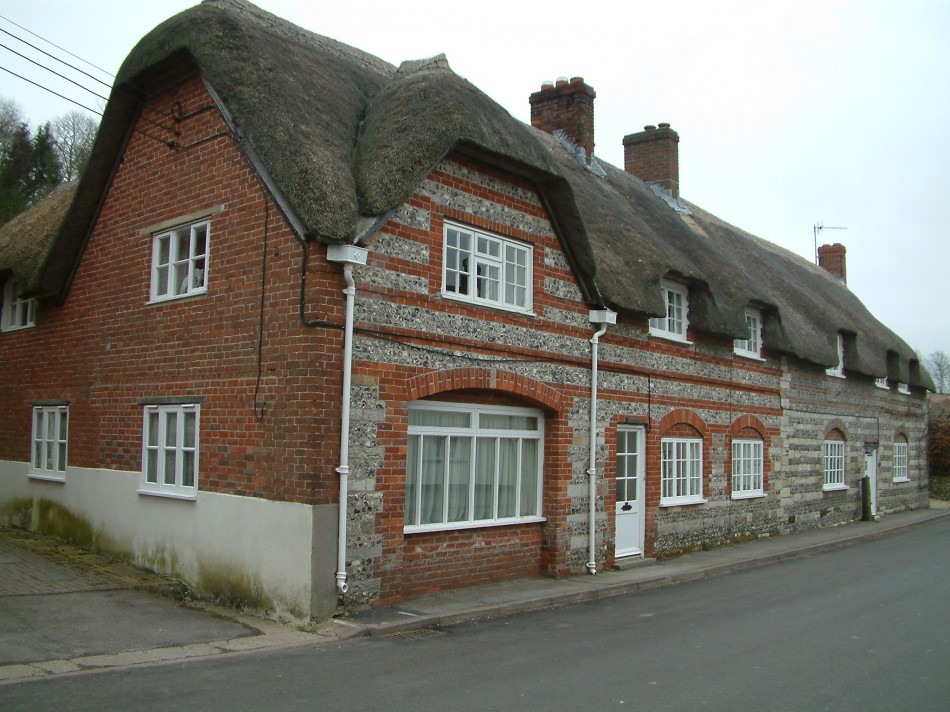 Brick, stone and flint used in a valley that in the mid 1970′s had a number of run down properties looking for new owners. Today homes here as in much of Dorset are highly sought after. 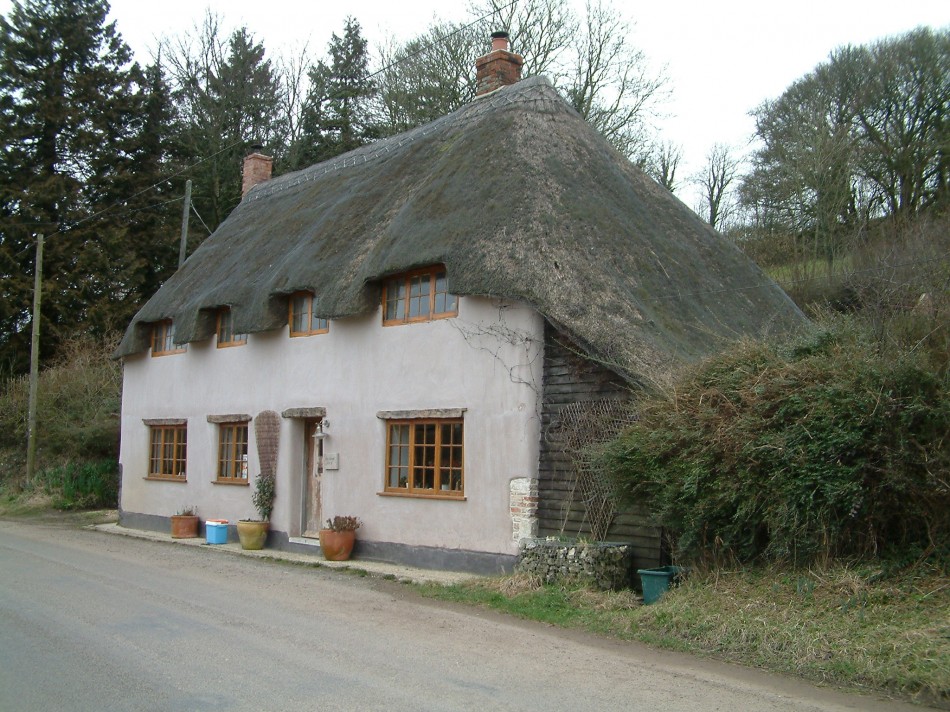 In the same valley another old cottage blending in to the surroundings and peoples perception of a traditional Dorset cottage. But like other homes this in reality is a relatively new building, meeting modern regulations but pleasing to eye and selling superb eggs! 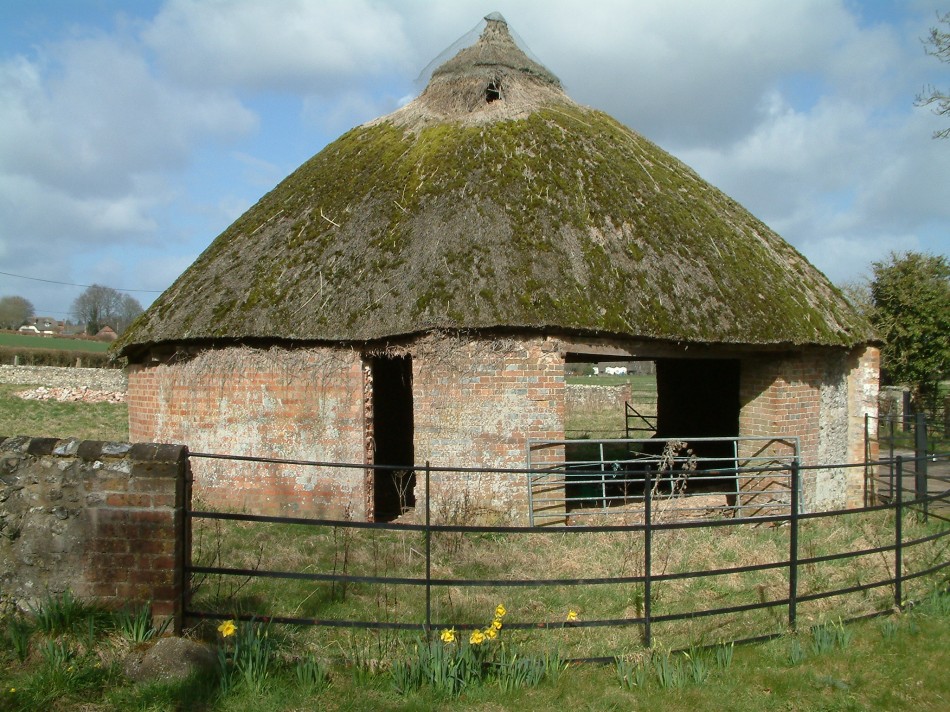 Agricultural buildings were also thatched, and to the same high standards as they had to protect the livelihood of villagers. But now few survive, expensive to upkeep as new materials and farming methods were introduced, above is a very rare pound. One near the Dorset border was beautifully restored by a master thatcher who stored his materials in it, and gave it a new lease of life. Unfortunately vandals came over the border from Yeovil and senselessly burned it down destroying an important part of the country’s heritage. 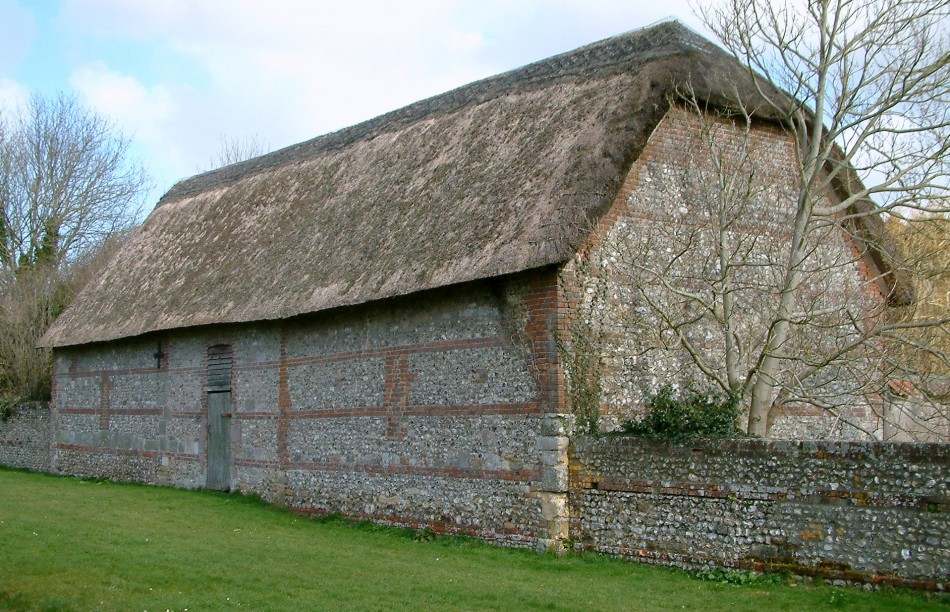 Whilst few thatched agricultural buildings have survived, those that have are well built, and well loved. Often part of manor farms which are more likely to be private dwellings now than bustling working farms with large machinery and few labourers. The thatched hay stacks once seen in fields across the country are truly objects of days gone by, replaced by giant plastic wrapped bales. 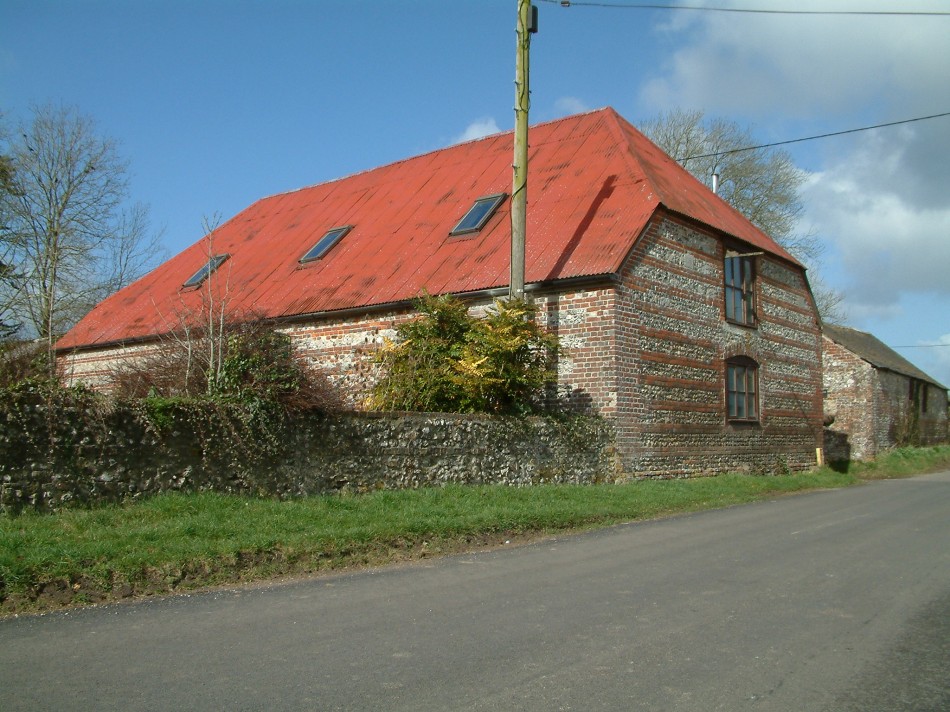 Perhaps as farming methods changed with automation, and firms like www.Burtsteelfabrications.co.uk put up bigger and bigger barns across Dorset many more old thatched examples could have been destroyed. However farmers anywhere hate to throw things away, and to destroy an old barn to build a new one where space permits is more cost. Small businesses and craft units moved into redundant barns and the steel erectors replaced the thatchers by applying wriggly tin to many ancient structures. The roof shape often revealing the history. 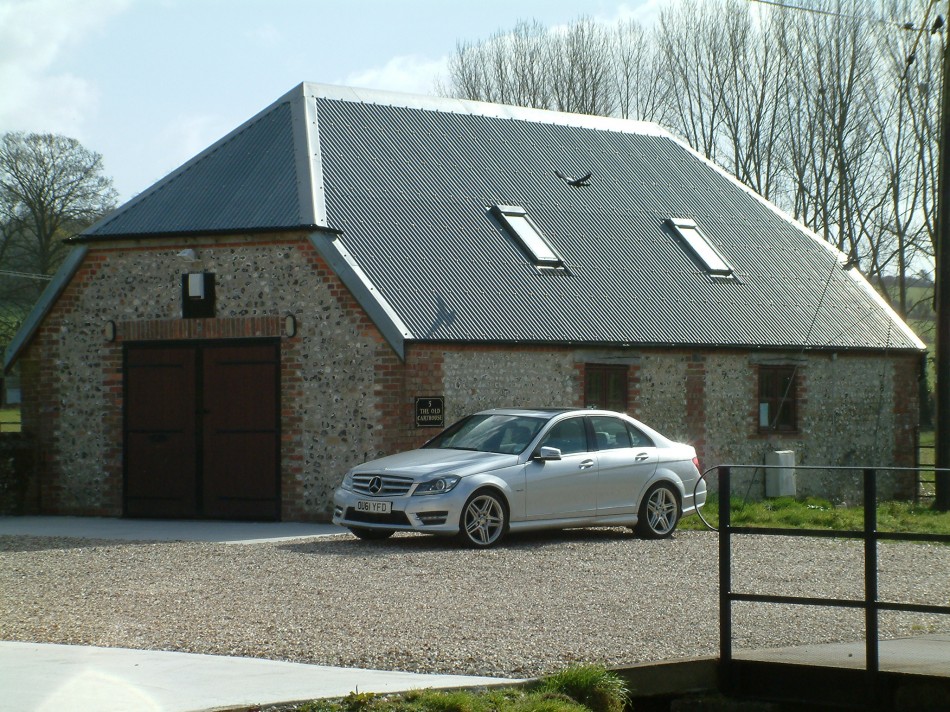 In that unseen turn of fate, new barn type buildings are even constructed with the steel erectors fitting modern insulated secure roofs. Small successful businesses thrive across Dorset in rural locations tucked away saving many farms from housing development. 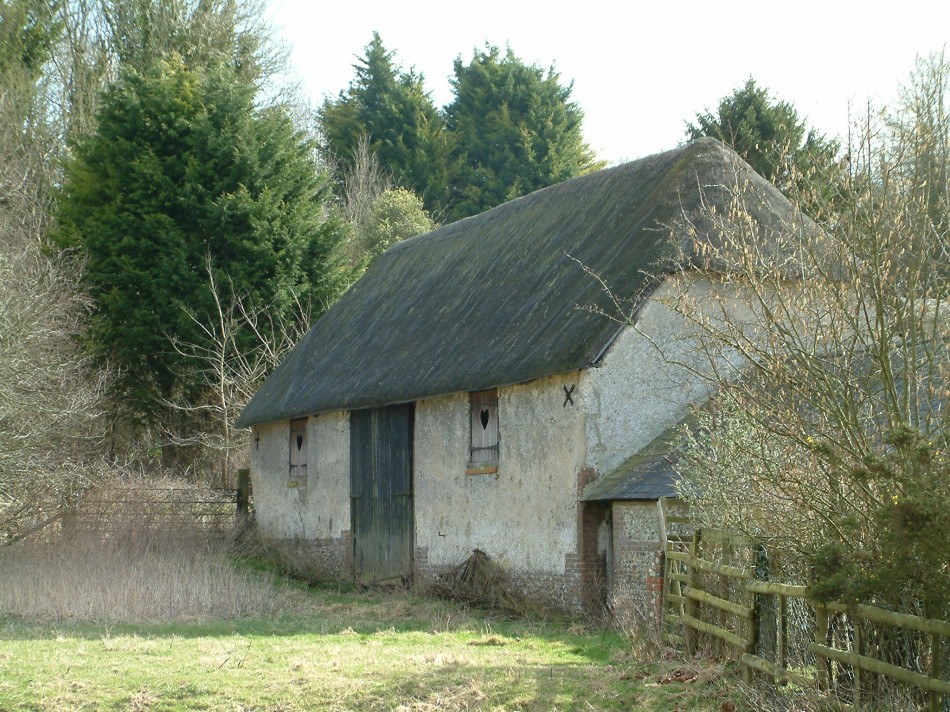 A rare Dorset thatched agricultural building still in use, note the brick foundations and protective corners for the rubble stone walls. 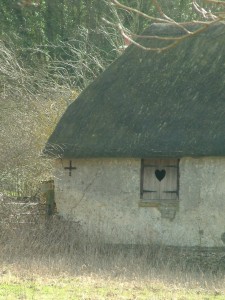